The History of Sandwich Police Department

In 1628 John Vincent was elected as the first Constable.  George Allen became the next Constable in 1639.

When Sandwich was fully incorporated as a town at the court of June 1639, the first two deputies were John Vincent and Richard Bourne.  The two deputies commenced a long course of public service.

In 1655 William Bassett was elected a Constable.

In 1837 the town of Sandwich had a trial for the illegal sale of liquor.  Three barrels were seized including gin, rum and cherry rum.  The Constable was ordered to split the barrels and empty the contents into the creek.  This produced great excitement downstream as many men lined the banks.  They were seen taking multiple monstrous drafts.  It was reported that there were, “Many lively souls that night!”

In 1848 there was an absence of a police force.

1860 the Police Chief lead the Fourth of July parade.

In 1865 the town of Sandwich voted to build a lockup to house temporary violators for overnight or a few nights.  The lockup was located on River Street.  This building was solidly built with heavy planks both inside and outside.  It had two chimneys and two rooms

In 1880 there was a call to the Governor for extra police to help contain the Italian laborers (who were brought in to work on the Cape Cod Canal) who were left without money or housing when the contractor and straw boss disappeared.  The town provided food for the Italian laborers and they were shipped back to Italy.

In 1906 the Boston Globe warned motorists of a, “Sandwich Auto Trap.”

In 1915 the town voted to discontinue and remove the old town lockup on River Street.

In 1941 Gilbert F. Smith was named the first full-time Police Chief.  He earned an annual salary of $3,700.  He retired in 1955.  The police department was located at his house on Main Street.  A police department and cruiser was also authorized this year.

1948 a second Police Officer was added to the police force.  This was Joseph Milliken.  He worked until 1949.  William A. Winsor was hired to replace Milliken and worked until 1955. 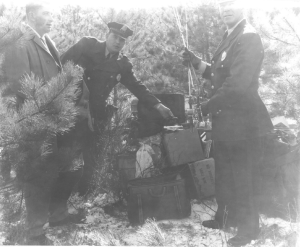 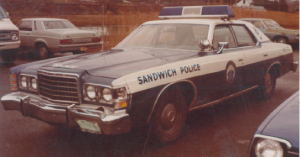 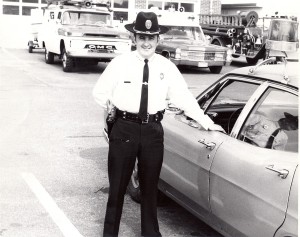 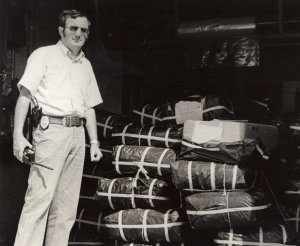 The department saw its greatest growth during this time.  He retired from the Sandwich Police Department in 1997. 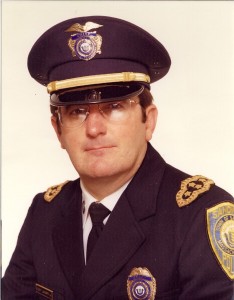 From 1997 to 2000 Paul Harrington served as the Interim Chief of Police.

In early 2010 Robert Palmeroy served as the Interim Chief of Police.  Chief Palmeroy had previously completed a career with the Plymouth Police Department.

In 2010 Peter N. Wack was appointed Chief of Police.  Chief Wack had previously completed a career with the Connecticut State Police. 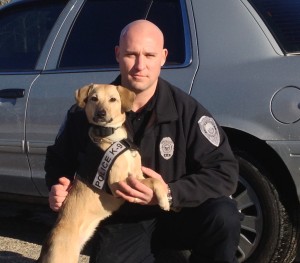 In 2012 the first narcotics canine, Koda, was added to the department.  She was assigned to work with Officer Matthew O’Brien.

In 2015 a new Community Service Officer position was created.  Officer Lauren Gilrein was assigned to this new position.

In 2015 a new Detective position was added to the department.  Detective Michael Gumbleton was assigned to this new position.

In 2018 our second narcotics canine, Tuuka, joined the department.  He was assigned to Corporal Matthew O’Brien.

In 2022 Oakley joined the Sandwich Police Department as the third narcotics canine.  She was assigned to Detective Matthew O’Brien. 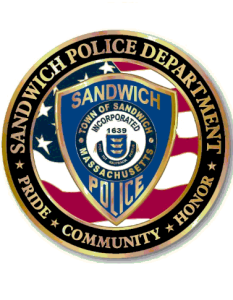